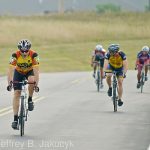 Dave came to me in February of 2010 and said, “Coach OB, make me faster and stronger!”  Dave had no real interest in racing or competing, he just wanted to ride better and be more involved in group rides.  Thgat fall, Dave wanted to do some cross races for fun and spend time with his kids that were taking part in “LionHearts“, which get children involved in cyclocross.  That program is a whole awesome story in itself!   In December of 2010, Dave broke his leg BIG TIME in a cross race.  His recovery was slow and painful.  In the Spring of 2011, Dave did a few of the Spring Training Series road races as a Cat 5, finishing well in each.  The PUR Tour was Dave’s first REAL RACE, and he NAILED IT!  Good job ICEMAN!  Proud of you!!!